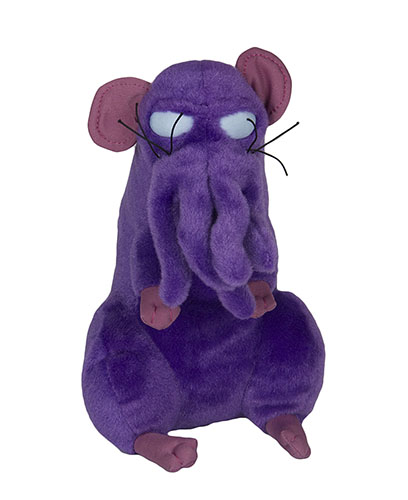 A few of our customers will recognize the purple Psychic Rats from our friends' game Mad Scientist and be excited to find there's a real life purple stuffed animal version you can have.  Most of you, though, will just think this is either the quirkiest, or ugliest, thing ever and some of you will just need to own one.  Or ten.

Backstory on the rats:  In the game, the purple Psychic Rat is one of six rats (Cyborg, Genius, Strong, Giant, Mutant, and, of course, Psychic) in a school's laboratory. At the start of the game the Psychic Rat escapes and frees all the other rats, who proceed to terrorize the school.

Comments from The Purple Store:
These purple rats are hideous and the more we look at them, the funnier they get.  We're never big at upselling at The Purple Store, but they're really funny when you put a group of them together.  Please contact us about volume discounts for hordes of 15 or more!

Rat trivia we learned: What is the collective noun for group of rats?  Apparently there seem to be many, including a colony of rats, horde of rats, mischief of rats, pack of rats, plague or rats, rabble of rats, and swarm of rats.  Just thought we'd share.

My new "Psychic Rat" just arrived in Australia and is settling in well. It is PERFECT and is so soft.
Reviewed by: Lorraine   Underwood, Queensland,  Australia

I am a rat lover, and a fan of the macabre, strange, and unusual-- so when I saw this plush, I knew I had to have it. A friend ordered it for me and it came about 4 days later-- the shipping was lightning quick and the plush is so soft and bigger than I imagined! I love it so, so much!
Reviewed by: Morticia   Buffalo, NY

Other categories that might interest you....
* Santa hat gift offer applies to most physical items (so not to emailed certificates, furniture, etc.) shipped directly from the store.
Join the Purple Club List Now!!