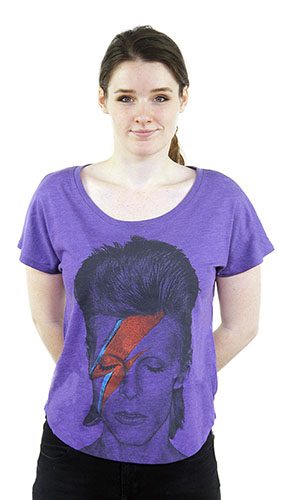 This purple Bowie t-shirt pays tribute to the artist who inspired and entertained so many.  The image captures his Ziggy Stardust era look in a subtle print.

The fabric is incredibly soft, with a casual/classy crossover style to the shirt design itself.

Comments from The Purple Store:
Did you know that in 2003, David Bowie mused about a possible second covers album and said he considered recording "Purple People Eater?" "I've got some beauts, absolute beauts, songs that just killed me. I even wanted to do 'Purple People Eater' by Sheb Wooley, but it's possibly good I never got around to that (laughs)." (Source: Billboard)
REVIEWS