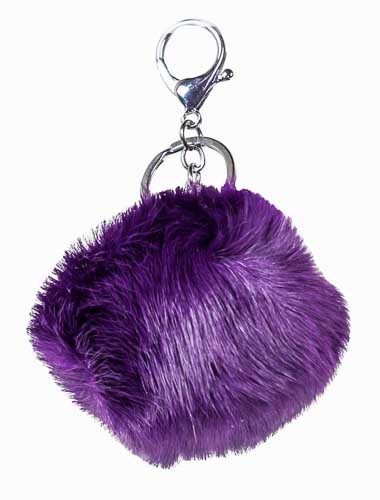 These are pure fun.

They work well as either a keychain, a zipper pull, or a backpack charm to hang on your bag.

They look great without it but get even fluffier if you zap them for a few seconds with a hair dryer.

Get a set! Add one of our Light Pom Pom Purple Keychains.

Comments from The Purple Store:
Yes, Star Trek fans, these are purple tribbles.

No tribbles were harmed in making these.
(Okay, a few tribbles might have been harmed, but there were five hundred more an hour later, so.....)

Non-Star Trek fans:  There are things called tribbles in a TV show that used to be on a thing called broadcast TV.  Tribbles are fictitious.  Probably.
REVIEWS

I'm very happy to know that no (or at least only a few) tribbles were harmed in the making of these adorable puffs. Live long and prosper.
Reviewed by: Trekkievet   Austin, TX